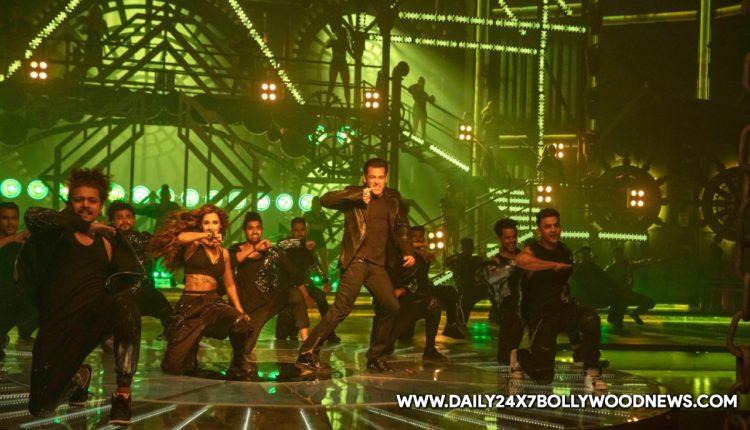 Mumbai : Nuff said, Eid for Salman Khan fans was far from the blast they were hoping for. Viewed on OTT, “Radhe: Your Most Wanted Bhai” suddenly didn’t seem as big as the hype had promised. Ten days into the film’s run, it can safely be said that “Radhe” won’t be Bollywood’s event of the year, as Eid habitually would usher for the superstar till a few moons ago.For Salman, his Eid release of 2021 underlines a repetitive streak that would be hard to gloss over. This isn’t his first lukewarm Eid show lately. There was “Tubelight” in 2017, “Race 3” a year later, and “Bharat” in 2019, and the already-forgotten ‘song release’ on YouTube last year (remember “Bhai Bhai”?).If you were to draw up Salman’s Eid balance sheet, “Radhe” marks the fifth consecutive year of an uneventful show on his chosen festive weekend. Compare this to his run from 2009 to 2016 (minus 2013, when he didn’t have an Eid release and Shah Rukh Khan released “Chennai Express”). There was “Wanted” in 2009, “Dabangg” in 2010, “Bodyguard” in 2011, “Ek Tha Tiger” in 2012, “Kick” in 2014, “Bajrangi Bhaijaan” in 2015 and “Sultan” in 2016.Between 2009 and 2016, that’s a scorecard of seven blockbuster Eids. With things getting progressively colder by the year with each Eid that has followed, the balance sheet now stands at 7:5.Salman’s upcoming roster of films would hint at the fact that he is dealing with the situation with characteristic don’t-give-a-damn attitude. Over the recent past, there has been buzz around four titles that he has lined up over the next years.There is “Kick 2”, reloading the crime-action cocktail of his 2014 Eid hit “Kick”, co-starring Jacqueline Fernandez. “Tiger 3” brings Salman back in espionage thriller mode, with Katrina Kaif. Mahesh Manjrekar’s “Antim: The Final Truth” is a cop action drama where he features with brother-in-law Ayush Sharma. Information on “Kabhi Eid Kabhi Diwali”, crediting Farhad Samji for direction and rumoured to co-star Pooja Hegde, has also been floating in the media.Officially, it is too early for confirmation on Salman’s Eid 2022 plans yet, and rumours at various points of time over the recent past has suggested each of these titles as the chosen release for the festival next year.Pertinently, apart from the fact that all his forthcoming films could be in for a toss-up for the coveted Eid spot, there is another point of note.
They do not promise much in terms of novelty.Consider each film individually, and you get the idea. “Tiger 3” and “Kick 2” aim at repeating what has already worked. “Antim” is said to bring him back as a cop — a Sikh cop if you insist, for some variety — after “Dabangg 3” and “Radhe”. Conceptually, “Kabhi Eid Kabhi Diwali” might seem like the film is removed from his set image, riding the theme of communal harmony, but one film might not be enough to let Salman escape image trap even if it was different from what he has been doing down the decades.The point to note here is whenever Salman has tried moving away from set image after scaling superstardom in recent times, the fans have seemed uncomfortable and responded with little enthusiasm at the box office — think “Tubelight” or “Bharat”. On the other hand, repeating his trademark blend of machismo and humour in “Dabangg 3” or “Radhe” (an extension of the “Wanted” prototype from well over a decade ago) has only appeared jaded after all these years.It’s truly a Catch-22, and it’s also where the tough deal lies about being Salman.As a mass superstar with a fiercely loyal fan base, he cannot afford to get away from his stock image. On the other hand, he seems to have exhausted every trick to regale by staying within his set image. The need to reorganise his superstardom is an urgent one, yet obviously a Herculean task. Scripting a fool-proof Eid release isn’t quite a cakewalk for Salman right now, and he would have to be extra cautious choosing his next Eidi for fans.Image trap woes beyond a certain point of time is a malady that plagues every screen superstar. Almost every Bollywood big gun has faced it after a point and it’s only the rare Amitabh Bachchan who manages to successfully reinvent and stay relevant as the marquee around him changes with time.You could of course say there is a difference between Salman and most other superstars of Bollywood. On screen and off it, he has somehow been a survivor. But to put a brake on his slide of recent years on next Eid, he would surely need to bank on much more than unadulterated bunkum as “Radhe”, “Race 3” or “Tubelight”, and surprise his fans.For a mainstream hero on the wrong side of 50 and not known to love the idea of surprising fans, that could be a tricky deal.

While choosing a project I choose stuff that won’t let me sleep : Sunil Grover

‘Friends: The Reunion’ to stream in India as well