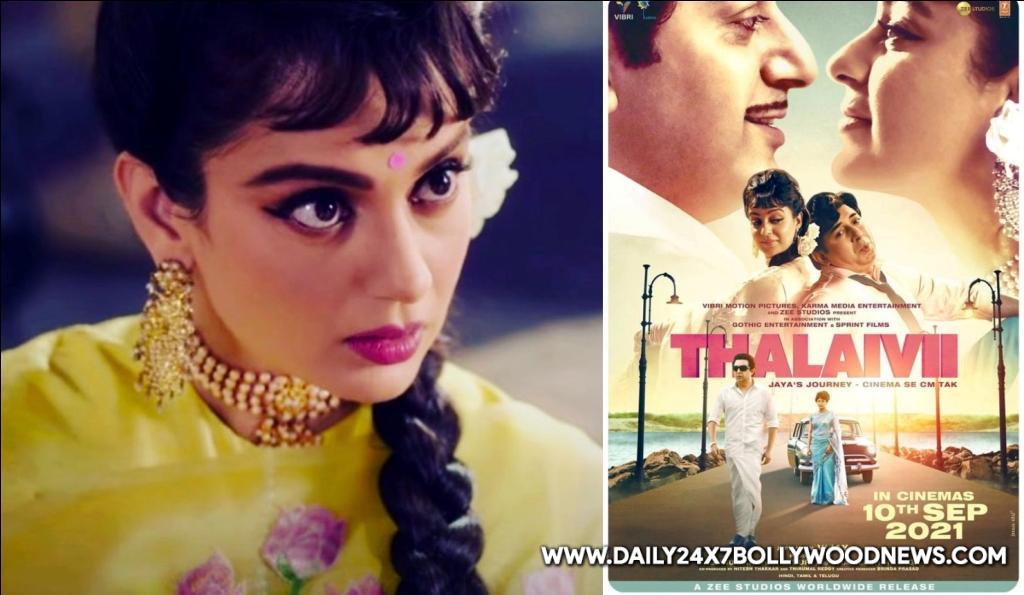 Mumbai : Being Jayalalithaa is not easy. A woman who went from being a reluctant actress to one of the most powerful politicians in the country. A woman with a chequered romance with one of the most charismatic actor-leaders in the country. A woman forever frozen now in our minds and hearts as a gigantic cut-out on Marina Beach.For far too long Jayalalithaa was overshadowed, in the male-dominated politics of Tamil Nadu, by the friendship-turned-rivalry of MG Ramachandran and M. Karunanidhi, immortalised on-screen by Mani Ratnam’s magnificent ‘Iruvar’ (1997). Her excavation began with Siimi Garewal’s iconic interview, which was the centrepiece of Gowtham Vasudev Menon’s 2020 web series ‘Queen’, and one hoped ‘Thalaivi’ would complete it.Unfortunately, it doesn’t in full measure. As Thalaivi, Kangana Ranaut is competent, but one has come to expect much more from the actress. For some reason, she doesn’t seem to inhabit fully the early Jayalalithaa. She is far better as Amma, the politician, the able deputy who outstrips her master. As a result the early part of the film, while colourful and grand, is reduced to a costume ball, where Ranaut and the brilliant Arvind Swamy try hard to imitate Jaya and MGR, instead of inhabiting the spirit of their characters.

And in underlining Jaya’s journey from Ammu, as the MGR character calls her, to Amma, which the people of the state call her, the film reduces Karuna, as he’s called in the movie, to a moustache-twirling villain played by Nassar, who had, memorably, played Annadurai in ‘Iruvar’. He has none of the poetry of Prakash Raj ‘Iruvar’, spouting instead a ridiculous ditty called ‘Mera yaar’ at a party meeting — which is odd, given that the dialogues are written by Rajat Arora. The same goes for the complex politics of the state, which is reduced to being seen through the prism of misogyny.While that is important, it renders the movie somewhat flat. Almost her entire journey is seen only through the lens of gender, whether it is the cavalier way she is sometimes dispensed with in movies to make way for other heroines; or the way she is treated by male colleagues.That is not to say the film doesn’t have its moments. Kangana is best when she has her back against the wall, going on the rampage against officials serving stale food for mid-day meals, or being molested in the Vidhan Sabha, which allows her to launch into a dialogue comparing herself to Draupadi and Karuna’s army to the Kauravas. Raj Arjun is excellent as the sinister R.M. Veerappan, who wants to control MGR’s life and career. “‘Bhagwan ke darshan keiye jate hain, unke paas nahin jate’. Minimum six inches distance,” he says to a rather excitable newbie.For Jaya, MGR is her mother, her father, her God, her guru, she says. For MGR, Jaya is both a reminder of his past, his first wife, as well of his future, because of her youth. She is also the student who learnt a little too well from her master. “If you give your people love, they will respond in equal measure,” he says. The tragedy of Jayalalithaa was that perhaps that was the most authentic relationship in her life.